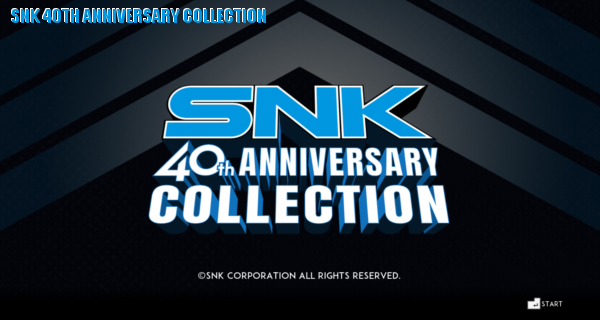 These days it seems about any game company that’s been around for over a decade has a collection to sell. It seems like every new device that comes along will be guaranteed to have a version of the Namco Museum or a compilation of Atari classic games on it.  And that isn’t a bad thing. There are a lot of fantastic games from yesteryear, going all the way back to gaming’s infancy. But due to whatever reasons, these collections don’t always come out so great. Sometimes they’re barebones. Sometimes they’re altered for the worst.

PROS: A great selection of classics and a fair number of extra features.

CONS: Some of the games’ controls had to be changed and the compromises aren’t great.

WHY NOT BOTH?: Some titles here come in a couple of versions.

That doesn’t seem to be the case with this one. SNK’s collection is quite good. One thing right away that I appreciated about it is that it takes the focus off of their NEO GEO platform. In the past, SNK has had a number of great NEO GEO compilations. It’s no surprise as it was arguably their most popular platform. But some people often forget SNK has been around for far longer than the NEO GEO and this collection celebrates that fact. Most of the games here are pretty big classics. Particularly in the realm of run n’ gun games and beat ’em ups.

SNK 40th Anniversary Collection gives you some of the more popular arcade games of their time. You get all three of the Ikari Warriors games; Ikari Warriors, Victory Road, Ikari III: The Rescue. You get Guerilla War, P.O.W., and Time Soldiers all of which were known for their 1980’s B Action film influences, and the twin knob shooting action that made many of them famous. They also give you TNK III which was one of the earliest games to do so. 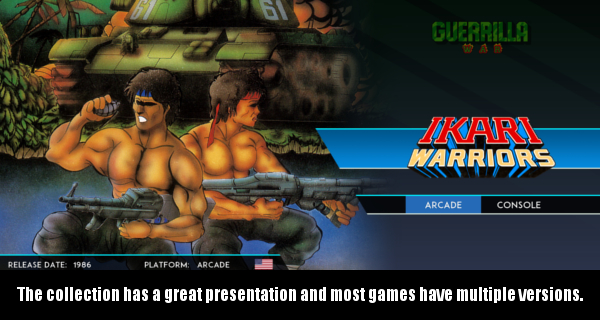 Other highlights are the inclusions of Athena, Psycho Soldier, Street Smart, and BEAST BLASTER. I was also happy to see that the compilation includes the arcade version of Vanguard, and it even references the Atari 2600 port in it. Strangely enough not by name. But this is where the collection of games goes beyond simply dumping ROMs in an emulator and calling it a day. This game includes multiple versions of many of the games. In the case of Crystalis, you’ll get both the Famicom and NES ROMs. In the case of Ikari Warriors, you’ll get the Arcade version and the NES version. All of the games are emulated very well and most of them will include a variant version be it two localizations or two platform versions.

This is a really nice feature and one I’ve found myself using fairly often. Well except in the case of the Ikari games since given the choice the arcade games are vastly superior to their NES counterparts. Another really nice thing is the game has scans of the different regions arcade fliers, home version box art scans, and more. They also go into some level of depth when talking about the history of each of the games in the collection.

Frankly, it’s very easy to recommend this one to anyone who grew up with these games in the arcade or newcomers who want to see what came before. Although I do have a few minor complaints about the package that I’ll get to momentarily. Another inclusion that should probably be a prerequisite at this point is the list of visual options. You can enable different borders on the screen, change the aspect ratio, and you can put on filters to simulate a vintage TV or monitor. Digital Eclipse which also did the Mega Man Legacy collection for Capcom, has done great work here as well.

However, there are a couple of things that just didn’t make sense to me. I don’t know why SNK couldn’t mention the Atari 2600 or NES or Famicom in the documentation by name. Especially since you get Crystalis in both NES and Famicom formats here. Plus, with Vanguard being acknowledged prominently on “The biggest console in North America” old geezers like me are going to know the VCS version is referenced while newcomers are going to be left to guess. Not a major problem, but it just seems a bit weird.

Second, is that some of the styles of a game genre don’t translate well to a d-pad or a thumbstick. And one such style is the light gun, rail shooter. This was true when Operation Wolf was new, it was true when House Of The Dead 2 was all the rage, and it’s true now. SNK brought back Beast Busters here. And I’m glad it’s here because it was an esoteric game I remember playing a lot in the arcades as a kid back in the day. When more popular games were taken up it was one of the ones you and your friends gravitated to because no one was mesmerized by it the way they were by one of the beat ’em up machines at the time. It’s a fun game. One that I was elated to see presented in this collection.

However, it is a light gun game and the movement of your thumbstick or d-pad cursor can never match the movement of your eyes and hand. As such, playing it in this collection is MUCH harder. As of this writing, I see no option to use a mouse with this game on PC or a motion control option on the Switch. These options would have been much better compromises. Even if it meant those versions would be more preferable as a result. Thankfully, you can just keep pouring in credits like you could in the arcade if your pockets were bottomless. But it would have been nice to have a couple of more control options for this one.

Still, I do like this collection a lot overall. There is a nice range of games you’ll know, others you may not know, and the historical extras are all a nice touch. Some of these games may not have the panache SNK put into their later NEO GEO games, but they are a lot of fun and hold historical significance in the realm of arcade games. As well as versions for Nintendo’s original 8-bit powered juggernaut. Adding ROMs of ports to other platforms of the time would have been even better since players could have compared them and enjoyed their favorites. But I’m sure there are also some licensing and contract concerns that made that unlikely. Still, I enjoy firing it up a lot. Digital Eclipse even gave SNK the treatment they gave Capcom’s Blue Bomber by making the soundtracks of games playable in a separate player.

It’s a collection that will skew toward the older crowd, but there’s enough here that anyone will find something they’ll enjoy checking out from time to time. Especially anyone who enjoys run n’ guns, shmups, and other arcade staples of the 1980s and 1990s. There’s also the knowledge that many of the characters that debuted in these games would show up in some of the NEO GEO’s biggest franchises. So even fans of The King Of Fighters or Metal Slug may want to look into this one if they haven’t already.