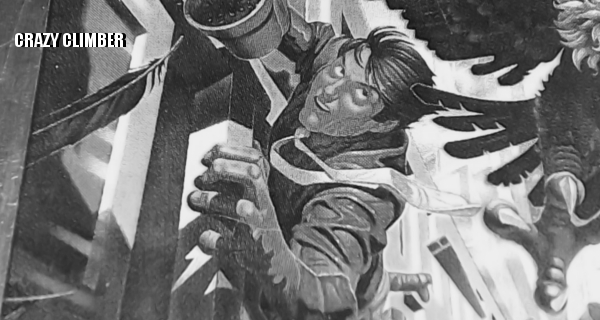 Even in the Golden age of arcade games, there were some obscurities. Amidar. Reactor. Wacko. These are but a few of them. But the one we’re highlighting this time around is noteworthy for a few reasons. The most important being that it is one of the most entertaining games of its ilk. It didn’t make as big a splash as Donkey Kong, Pac-Man, or its other contemporaries. Which is a shame, because Crazy Climber is freaking cool.

FALL: To your doom.

Released in 1980 by Nihon Bussan, Crazy Climber is the story of a man who scales the sides of skyscrapers. That may sound pretty inane to some. But it’s a lot more serious than it sounds. As you take control of our hero, you’ll have to scale the building, get to the top, and then GET TO THA CHOPPA! (Sorry, I couldn’t resist.) At the top of the building is a helicopter that will take you to the next stage. There are four buildings to climb, which then cycle over once you beat them. 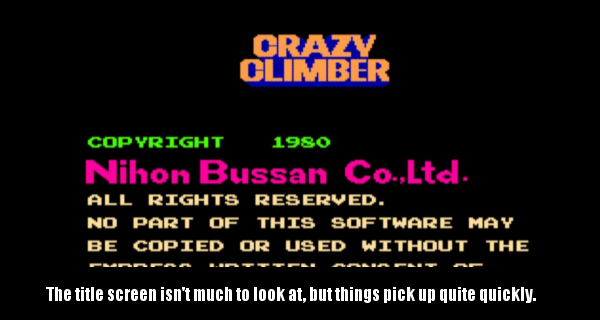 But don’t think you’ll have an easy time climbing to the top. Because there are several dangerous obstacles on your way to the top. The most common are the sadists who open the windows, and throw things from their apartments at you. I’m serious. Seemingly ordinary people, are out to murder you over your thrill seeking ways. They’ll throw vases, buckets, moldy fruit, and other stuff at you in the hopes of making you lose your grip. But the dangers don’t end there.

You’ll also be attacked by birds, and giant apes. On top of that, some of these buildings have shoddy construction. Because you’ll have to avoid falling girders, falling billboards, and live wires. Our free running thrill seeker is insane. No one in their right mind would choose to scale buildings in the process of becoming this dilapidated. Likely the reason we’re playing a game called Crazy Climber. 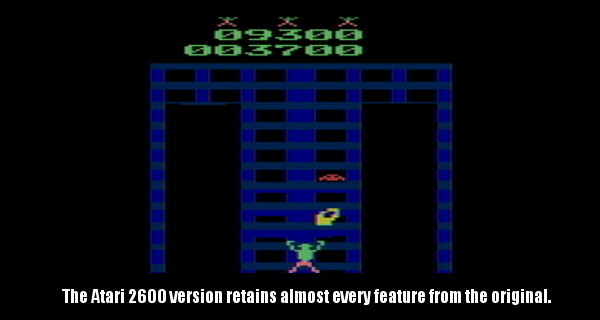 The original Arcade version is one of the earliest games to use a two joystick control scheme. Each stick controls one hand. You can move each hand left, and right. You can also reach up, with each stick, and pull back on the sticks to pull yourself up. For such an old game, the control scheme does make it feel a bit more realistic. The tricky thing is however, positioning yourself in such a way that you can get each hand on a windowsill to pull yourself upwards with. It’s pretty easy to get yourself in a situation where you’ll have two closed windows above you, and windows slamming down on your fingers as you’re unable to move. You also can get yourself into situations where you can’t get yourself oriented to move left or right if you don’t pay enough attention. This sense of realism in spite of the unrealistic scale, adds a lot of depth to Crazy Climber.  It also makes things more challenging because you not only have to pay attention to the windows, but also keep an eye on all of the aforementioned bad guys, and obstacles. 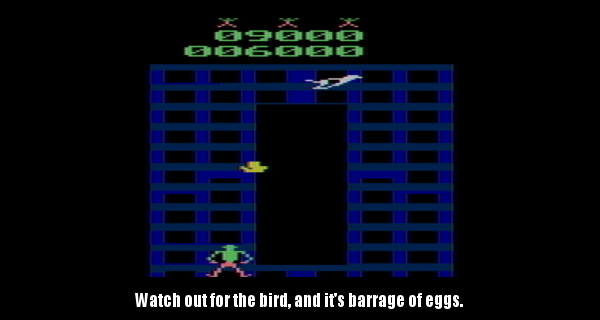 It also features some pretty detailed graphics for its time. And again, while your character is beyond the scale they should be, this still works from a game play perspective. You can make out the obstacles, and projectiles fairly easily, and your character has a discernible costume. This is also an early example of voice samples making their way into arcade games. If you sit idle for too long for instance, the narrator yells “GO FOR IT!” at you. You also have a few shouts when hit by something, and a nice scream as you fall to your doom. 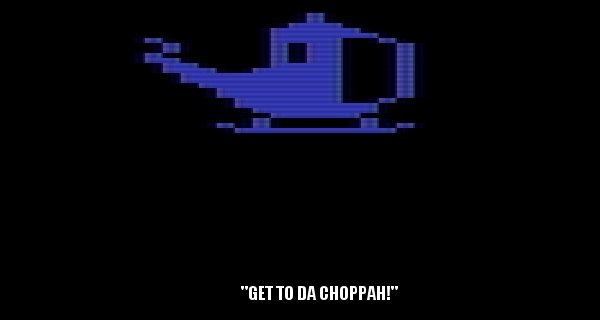 Crazy Climber has seen a number of interesting remakes over the years, but the original game was ported to the Famicom, and Sharp X68000 computer in Japan. . These releases came out years after the arcade version in 1986, and 1993 respectively.  It was also put out on the Emerson Arcadia 2001 in Japan around the time the Arcade version was around. Here in North America it was ported to the Atari 2600 in 1982. The VCS version is notable because it was an Atari Club exclusive upon release. Atari Club members would receive Atari Age magazine, which featured articles about upcoming games, and enthusiast news. Not unlike what Nintendo Power did for Nintendo fans years later. Four Atari 2600 games would be Atari Club exclusives that (at least initially) only could be ordered directly. These games had lower production runs than many of the other games, despite showing up in store liquidation sales during the Great Video Game Market Crash. 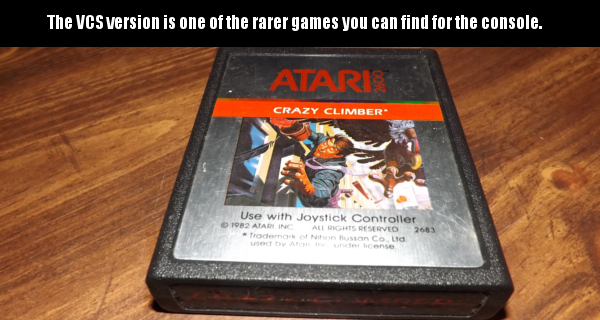 As such, Crazy Climber is one of the rarer Atari 2600 games, and while it isn’t going to hurt your wallet the way a highly collectible NES game might ( Panic Restaurant says “Hello.” ),  you can still expect to pay around the cost of a new release should you find one in the wild. It’s also a pretty great port of the Arcade version. Like most home versions it has been retooled to work with one joystick. But the controls are on point. You now have to move the stick twice when trying to move left or right, as the first push moves the first hand, then the second. You still pull yourself up by pulling back on the stick. The VCS version also does a wonderful job in the presentation department. You certainly won’t confuse it for the Arcade version or one of the ports to more powerful hardware. But it does look a cut above what the Arcadia 2001 version looks like, and even some of the clones that showed up on some of the home computers of the time. It’s also a bit easier than the arcade version, but by no means is it a cakewalk. It is still quite the challenge. Most of the enemies from the original are here, and behave the same way. Frankly this is one of the best of Atari’s first-party port releases, and can hang with the likes of Space Invaders, Joust, Phoenix, and Ms. Pac-Man. If you collect 2600 games, and can swing it, this is one worth picking up. 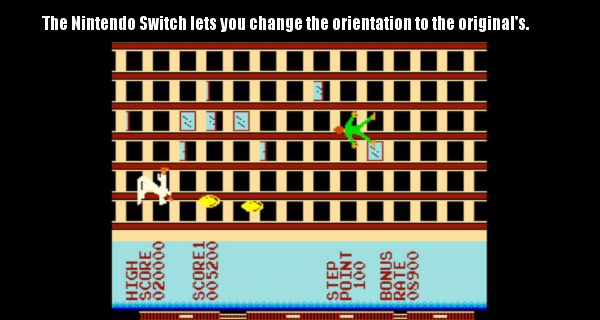 Of course down the line there were updated versions released for the PlayStation, PlayStation 2, and even The Wonderswan. I can’t really comment much on them as I don’t have them. But generally they have a reputation of retaining what makes the original version fun while adding their own tweaks to the formula. And while these days most of us won’t likely be able to find the original cabinet while out in public (though if your local arcade or pub does have one, do play it.), there are several compilations out for older consoles. If you happen to have the Nintendo Switch, you can buy the original Arcade version on Nintendo’s eshop for download. The Switch release has a couple of nice features in it too. You can employ some filters if you prefer that old school, scan line look. But more importantly, you can change the orientation so that the game will display vertically instead of horizontally. This makes it so you can take the joycons off of the console, and play the game in the same layout the arcade cabinet had. The thumb sticks also work the way the original machine did. So it gives you a nice portable experience when taking the Switch to a public setting. 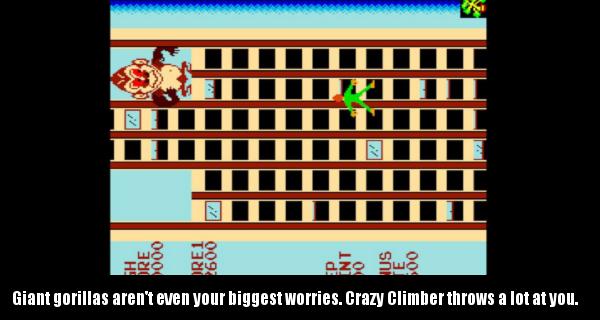 But however you manage to do so, you really ought to experience Crazy Climber. It may seem simplistic, but the level of strategy, and risk versus reward here is quite engrossing. It may have some cheap A.I. at times, and you’ll get into inescapable situations. But at the end of the day sometimes less is more, and this is definitely one of those times. Whether you spend a five-minute session or a five-hour session on it, it will never feel like time wasted. Grab your favorite beverage, and get climbing.