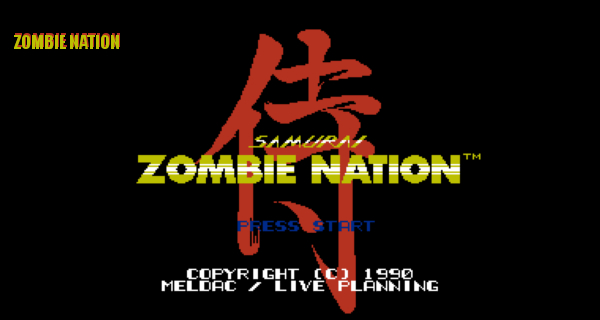 Over the course of video game history, there have been a number of titles that have fascinated us. Sometimes they gave us something we never experienced before. Other times they tweaked or perfected an existing formula. Some of them pushed the idea of storytelling. But sometimes a game will surprise us with just how bizarre it can be. Zombie Nation is one of those games.

CONS: Hit detection could be better. Brutal difficulty may turn off some.

A CAR PAYMENT: Is about how much this NES Game Pak will set you back. It isn’t cheap.

Released in 1990 by Meldac, Zombie Nation (or Samurai Zombie Nation as the title screen suggests) is a peculiar shoot ’em up. Instead of a space ship, or a fighter jet you pilot a disembodied head. The original Japanese version was called Abarenbou Tengu, and was released on the Famicom. In that version you play as a disembodied head as well. But in that version, the head is the mask of a Tengu.

In Zombie Nation the story goes, that a meteor crashes somewhere in a Nevada desert, and unleashes an alien creature named Darc Seed. Darc Seed takes over the world using magnetic rays somehow, and everyone is turned into zombies as a result. So the literal head of a samurai named Namakubi flies from its body, and goes on a mission to the USA to kill Darc Seed, and save the world. As well as regain his sword. 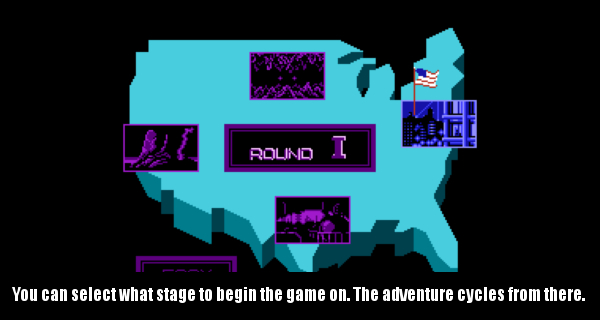 Zombie Nation takes one idea from Capcom’s Mega Man series, by letting you select which stage you want to begin the game on. You can’t choose stages after that, they’ll play sequentially from that point on. So for example if you choose Stage 4, after you clear that stage, you’ll play Stage 1, then 2, and finally 3. If you manage to clear all four of the stages you’ll go to a 5th stage where you fight Darc Seed one on one.

Zombie Nation is a really short game. But what is going to keep you playing it for hours is its high difficulty. Even if you play the game on the easy setting, it is still very unforgiving. There are several reasons for this. First of all, the head of Namakubi is a very large character. Being this is a shmup, that means it is going to be very hard to dodge the enemy firepower, and obstacles. The game doesn’t follow the typical shmup health formula. In many of the most popular shmups like R-Type, getting shot by anything will kill you. No matter how many power ups you have, one hit, you die. 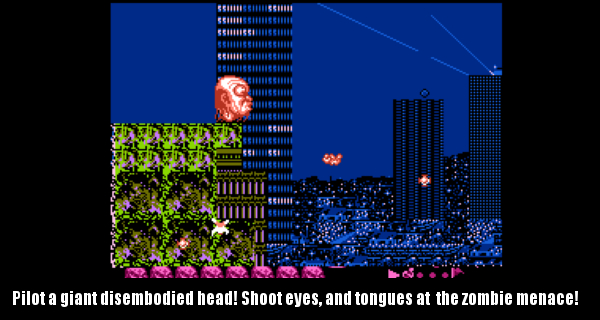 Zombie Nation opts to give you a health bar instead. So getting shot will slowly reduce your bar until you die. You’ll also get continues when you run out of health, though these are limited. But you’re still going to want to avoid as much as humanly possible. Because not every attack, or projectile damages you equally. Case in point; the lightning. In nearly every stage there is lightning, or an equivalent. During which, cloud to ground lightning will appear. If one of the bolts so much as grazes you, your life bar goes down to one hit. A single hit by anything after that will finish you off.

The saving grace here is that you can try to replenish your health by eating people. The very people you’re trying to save will act as your nourishment. Floating heads are not the strangest part of Zombie Nation. You find this nourishment by destroying the scenery. Not only do you shoot eyes from your eye sockets at enemies, but at backgrounds as well. All while also puking up grenades. Destroy enough of a building? A hostage flies out to be eaten. Blow up enough of a mountainside? A hostage flies out to be eaten. But with the lightning, and hundreds of projectiles headed your way, getting these meals isn’t very easy at all. 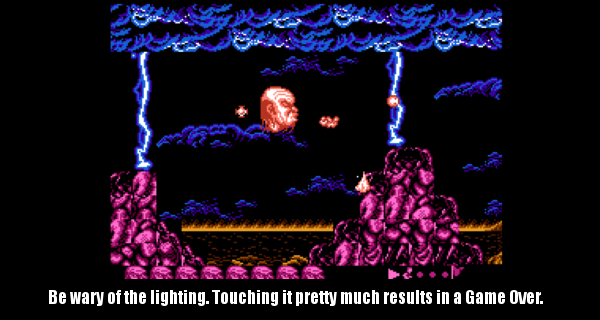 But there is another reason to eat hostages. Eventually you’ll upgrade your shots to be more powerful. Things that took five or six bullets to destroy before may take one or two. After you eat enough people you’ll even get a one-time use smart bomb.  One you use it however the power up shots reset, and you’ll need to feast on more hostages.

The four bosses are pretty zany too. Stage 1 pits you against a Gorgon version of the Statue of Liberty. Stage 2 has you facing Atlas. Stage 3’s boss is part of the scenery. In this level you fly through a sentient power plant, and have to blow up the core. Stage 4 throws you up against two snakes. Beat all of these foes, and you’ll go on to the final battle with Darc Seed. Who is just a giant grey, who just kind of lies there while you avoid marbles. An underwhelming affair to be sure. Especially after so many high stakes battles.

The bosses have difficult enough patterns to memorize, and move through. But what makes them even harder is that there are no health bars or other information on the screen. So you can’t tell how hurt you are, or how close you’ve gotten to victory. When you do defeat a boss it’s always a surprise. Even if you’ve become really good at Zombie Nation. 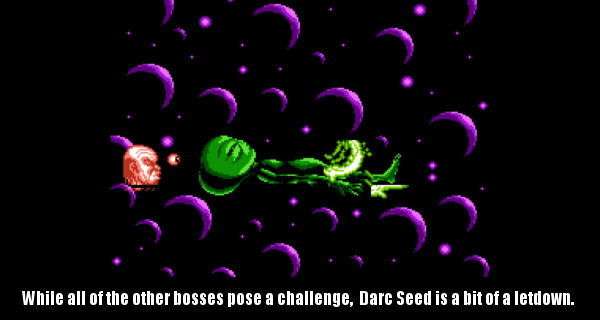 But whether you’re good or bad, there is enough to like to recommend the game. It’s hard. But not as hard as a lot of other NES shmups. At least not once you figure out how to effectively avoid some of the more devastating things in it like the lightning. The hit detection could have been a bit better. Sometimes things you don’t think hit you actually did, and the inconsistent damage output of projectiles can get annoying. Still, the experience is mostly pretty fun, and it is worth experiencing the oddity of it all.

Be that as it may, Zombie Nation is also one of the more expensive NES Game Paks these days. It came out near the end of the NES’ life span. While not as rare as something like Power Blade 2, or The Flintstones: Surprise at Dinosaur Peak, it is a scarce game. So expect to pay an exorbitant amount of money to add it to your collection.