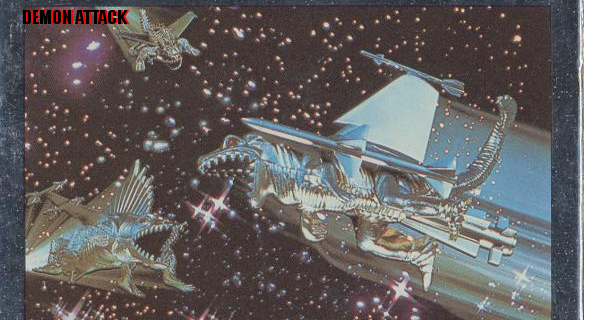 They can’t all be new releases. Sometimes life just has a way of throwing everything including the kitchen sink at you. So you don’t have the precious time to play a massive open world western, or a critically acclaimed RPG. But somehow you want to find time to play something compelling. This is why many early games can fit that bill, and often hold up today. One such game is a staple on early cartridge based consoles.

CONS: Not every version features the boss stage.

MAGIC: Imagic’s developers always seemed to perform it on the venerable VCS.

Released in 1982 Demon Attack is one of many titles that tried to build on the core concept set up by Space Invaders. It also has some inspiration from another early shmup; Phoenix.  Where Space Invaders saw you fighting a grid of ships from underneath the confines of shields, Demon Attack pits you against three enemies at a time. Destroy them, and another three will warp in. The game has this really terrific effect when the alien ships, and creatures come into battle against you.

Another thing to be aware of is the fact that each wave introduces new enemy types. Each with its own attack pattern, and weapons. So you should not expect to be going after the same ships over, and over. Or the same bullets over, and over. If you survive a wave without dying you’ll earn a 1-Up. This makes it very easy to get complacent. “Oh I’ll just stock up on lives, and never worry!”. But you should worry. By around the fifth wave you’ll find shooting enemies splits them in half rather than destroying them. You then have to take down each half. And you have to take them down quickly. Once you take down one the other will begin chirping like crazy before suicide diving toward your cannon. The back lines will then move forward taking their place.

While not one of the best looking games on the console, it’s visually a cut above what most of Atari’s own release had looked like up to that point. This is especially true of each of the enemy types. Demon Attack is one of the first 2600 releases to deliver such a wide variety of characters. Considering the limitations of the hardware of the time, and the limitations of cartridge space, it’s no wonder this is one of the first games worth picking up when starting a VCS collection. As a publisher, Imagic seemed to know how to push what was possible on consoles of the time. Like most games of the era there are several variations you can play by using the Game Select switch. Including some two-player modes where you alternate turns trying to out score each other.

Robert Fulop developed the game for the Atari 2600, and after Imagic had settled with Atari over the similarities in Demon Attack to Phoenix (Atari had home console publishing rights), it would go on to be one of the best-selling games on the system. There are no less than three printings of the game. A text label version, and a picture label version are the most common. You’ll find they’re often one of the cartridge variants you’ll see in a bundle of VCS games. After the crash, Imagic would find itself absorbed into Activision who would put it back out in their line of re-releases. This cartridge eschews the original Imagic style, and comes in an Activision shell, with a blue label. This version is considerably rarer than the common types, but is still far from impossible to find.

In any event Imagic had other programmers port the game to several other platforms of the time. The Intellivision, Magnavox Odyssey 2, Commodore VIC 20, Commodore 64, Atari 400/800, TI-99, and Tandy computer all saw versions of Demon Attack. Many of them have better graphics than the original version, and include a boss fight! Be that as it may the VCS original holds its own by having such fluid, and responsive controls. In fact, it’s better than many of the more advanced ports that released elsewhere.

Be that as it may, most of the ports are still quite good, and the boss fight can be pretty interesting as you transition between a surface, and space setting. Defeating it then continues onto the following wave. An interesting piece of info is that the 2600 version of the game almost had an end, as after the 84th wave the game would not continue. After release though, someone managed to get that far, and so the game’s future pressings added a line of code which made the game endless. Unfortunately, there’s no real way to know which cartridge will have the original run inside without actually getting to the 84th wave.

Demon Attack isn’t particularly hard to find these days, Especially not the Atari 2600 version. However, the Odyssey 2 port is an exception. Like many other third-party Odyssey 2 games, it isn’t something you’ll stumble upon in the wild all too often. Still, no matter which version you play is a fun time. Even if the box art does consistently make appearances in bad box art articles. Demon Attack may be a simple game by today’s standards, but it did a lot of things few other fixed shooters were doing. It’s an early game everyone ought to check out. For those who are curious but don’t want to invest in one of the platforms it appeared on just yet, it is in the Activision Anthology for the PS2, and PC.