LTTP: Retro Speed Run streamers will need to find a good scaler to use with it.

Enter the Elgato HD60 PRO. You can find this in either a PCI Express card for your desktop computer, or you can find an external version that connects to your machine with a USB 3.0 cable. We’ll be taking a look at the internal card version here, as that’s the version I bought after getting a better than expected tax return this year.

The Elgato HD60 PRO comes in an attractive package. There’s a sleek slip cover over a gate fold box. Upon opening that box, you’ll be greeted with the card itself, a booklet, a HDMI cable, and a handy low profile bracket for those with a flex case. You’ll know if you have a flex case, they tend to be used on computer models that go for the small, sleek, and rectangular look. Often times these cases do not have the height needed for expansion cards. Yet, they’re often built using motherboards that do allow for some expansion. Unfortunately, this usually means hunting for specialty “Half-Height” or “Low Profile” cards. So it is nice that this card comes with that low profile bracket. If you have such a computer, and want to stream your PlayStation 4 games through it, this card makes that possible. 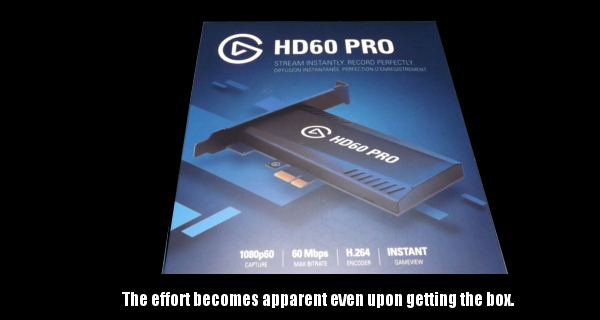 Once you have the card installed, you may or may not be surprised to find no CD or Flash Drive in the box. Elgato doesn’t include drivers in the box. Instead, you have to go directly to their site to get them. And they don’t simply give you the drivers, they include them in their software utilities. This is the first of the two grievances I have with the product. In the grand scheme of things both are fairly small. But they do make things needlessly complicated. The software itself is actually quite intuitive. But it is broken up across a few different utilities depending on what you want to do with it. There is an audio utility for those who only want to capture sound. The Game Capture HD utility which records video, as well as streams video. The Control Center for managing accessories. Finally, there’s the Stream Deck which is for the optional Stream Deck device. You don’t have to download the latter two, but you may just want to get them, and install them anyway in case the need should arise.

The main one you’ll really need is the Game Capture HD utility. As I mentioned before, this is a great piece of software. But even if you’ve decided to use something else, you’ll need to install it because it contains the drivers for Windows 10. Without those, your computer won’t know what you’ve installed into the motherboard. If you do decide to use the Game Capture HD though, you’ll be surprised at how simple it is to navigate.

There’s a clearly marked button for the capture settings you want to use. You can go with standard resolutions like 480, 720p, or 1080p, and you can set the frame rate to record at 30 or 60 Frames per second (FPS). If your computer is newer, you shouldn’t have any problem running things on higher settings with newer consoles. If your system is older though, you can tinker with the settings until your happier with the performance. Do make sure your system is above the minimum requirements before you buy this or any expansion for your computer though. If you don’t have compatible hardware, you’re not going to have a great experience. Still, my machine is getting long in the tooth, (i7 4770k, 16GB RAM, a 250GB SSD, 1TB SSD, and an Nvidia GTX760) yet had zero issues using this card. 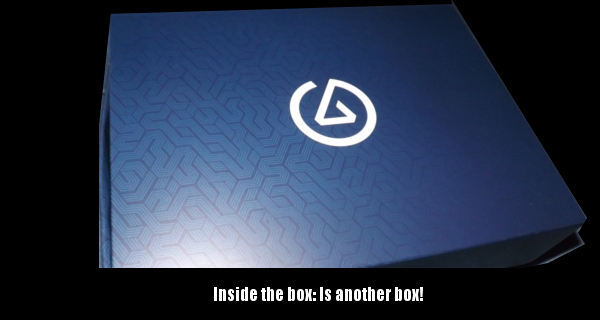 The software also has an easy to spot recording button, and streaming button. Once you tie the software to your appropriate account (Twitch, YouTube, etc.) it easily syncs up with your settings there, and just seems to work. At least it did for me. There are also a host of preset overlays you can choose to use, all of which can also be customized. You can import your own art, websites, banners, and more. You can put in a webcam PIP. You can run a green screen. The software is an amazing little utility. Especially if you’re not familiar with video production, or you’re new to streaming. When you are streaming you can easily move back and forth between full screen gameplay or windowed with your various settings around it.

Other easy to tweak settings are sounds like your microphone, and game audio levels. You can have the software lower game audio while you’re talking for example. You can also tinker with your bit rate settings so you can try to find a balance between performance, and clarity for your stream as well. It doesn’t however have a lot of options for specific plug-ins. You can work around this by adding website links to things that will behave like a plug-in. Like a chat box for example. But there aren’t a slew of dedicated Elgato software plug-ins.

That said, other utilities like OBS, and XSplit give you a lot more freedom if you’re willing to take the time to learn how to use their features properly, and experiment. If you want to really do more unique things with your channel, and you’re looking to be a more professional looking personality on a streaming or video site you’ll want to either master using one of those, or buy a more feature-rich suite that the card is compatible with.

I’ve really liked using this card thus far. It has an excellent build quality, and it outputs as well as inputs. That means you can take the feed from your Nintendo Switch dock for example, and bring it into the card to be processed. But you can also run a second HDMI cable out to a TV or Monitor. This makes it especially nice if you’re looking to multitask on a computer screen, while you’re playing a game on the second one. Those who want to have Twitch opened in one window, their utility of choice (Elgato, OBS, XSplit, etc) in another don’t have to worry about having to play the game windowed, or continually have to Alt+Tab between things constantly.

Of course, it isn’t going to be perfect for everyone. The other minor issue for me is this card doesn’t have legacy inputs on it like Composite, or S-Video. So if you want to use it to stream things like NES games you’ll need to get an adapter or scaler to convert the signal. For merely capturing footage this is fine, but for streaming speed runs, keep in mind this will induce a little bit of input lag. A really high-end scaler like the hallowed Framemeister will be a safe bet for reducing it to a minimum, but if you don’t have that kind of money there are a wide variety of options. But you’ll have to do a fair amount of research to see what device in your budget will give you the best results.

The other thing to consider are the number of other cards that do include legacy support. If you’re planning on mostly recording from legacy consoles, or want to digitize old analog VHS or Beta tapes from elder family members, you may not need to get a separate scaler with one of those other cards. However, not all of those other products are built as nicely, and few have a utility as seamless, and easy to figure out as Elgato’s downloadable one. Really you’ll have to decide on your own which route is the way to go.

That being said, I’m actually quite pleased with this card. The performance has been excellent, it has a great build quality, as well as fit, and finish. The software utility while, broken up across two programs, and two optional ones, is intuitive. It’s very easy to use, especially for someone like myself who isn’t as familiar with customizing things in OBS as many streamers, and YouTube personalities are. If you’re just starting out, and want something you can get into using right away, this is an excellent card. It might cost more, but the convenience, and quality are worth it. Just remember if you’re looking to broadcast speed runs of games on consoles of old with it you’ll want to find a scaler that can mitigate some of the inevitable input lag to go along with it. For anything current though, the Elgato HD60 PRO is a winner.