Man, the past several days were an on and off again situation with getting electricity. With the recent tropical storm, there were issues plus I lost it for a day this past Sunday after hearing a loud hum, then seeing downed wires outside. And the power was shut off after that so the five trucks of linemen could redo the street. 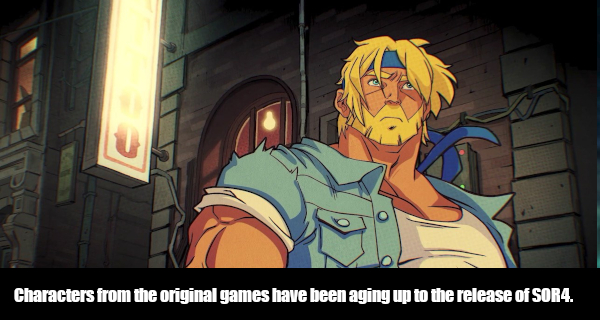 It got me thinking about the backdrop to Streets Of Rage 4. Mr. X is gone from the city and for a decade some normalcy returns. But suddenly the violent crime level skyrockets. The power of both electrical and local civic variety is transferred to a new criminal enterprise: The Y syndicate. Led by the evil Mr. X’s twin progeny. They’ve recruited a lot of the original enemies you remember from the Sega Genesis days, along with a number of new surprises.

CONS: Some cheap A.I. May seem too short for some.

SEGA: Should have Lizardcube give Golden Axe and Comix Zone this treatment.

This new Streets Of Rage has a very nice comic book look to the whole affair. So much so, that I immediately began to wonder what a new Comix Zone might look like if helmed by Lizardcube, the studio that brought us this sequel. It’s bright, and colorful in a way that still fits the dystopian, chaotic remnants of a city now ruled by criminals B movie vibe it goes for. The artwork and animation here are fantastic. Streets Of Rage 4 also has a lot of cool galleries where you can see the concept art. And it goes a step further than some other games here because you get to see a lot of the work in progress rather than a handful of sketches or prerendered graphics.

Unlike many comic books, they haven’t kept the game in the same narrow 20 year period of the character’s lives. Old stalwarts like Axel Stone are… well, old. Not elderly just yet, but you can tell he’s been out of action a while. It’s like they took a splash of The Expendables movies and sprinkled it on top. But much like River City Ransom: Underground’s mainstays, they haven’t let themselves go either. And there are a couple of newer characters introduced here. Cherry, Adam’s daughter makes her debut along with Floyd who is this really cool combination of Mortal Kombat’s Jax and Final Fight’s Mike Haggar. Of the roster I found him to be the most enjoyable to use. 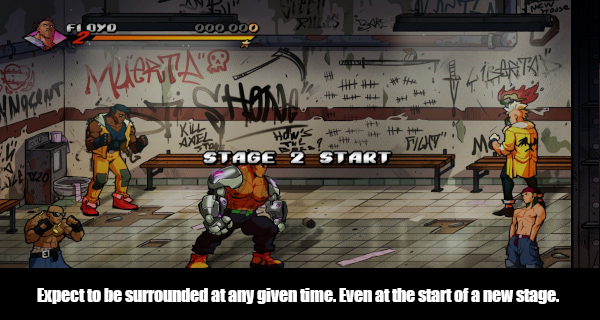 But everybody is viable and you’ll unlock other playable characters over the course of multiple playthroughs. You’ll also be enamored with the soundtrack here as you get renditions of classic chiptunes as well as some new jams that complement those nicely. It goes along well with the theme of bridging the classic trilogy of brawlers with some modern-day visual flair. But the game also has a number of unlockable retro characters seemingly right out of the Sega Genesis games. There are also some hidden boss encounters that take you back to the 16-bit console’s sprite style. Think almost like the retro stages employed in games like Shadow Warrior (reboot) or Rise Of The Triad (reboot).

The game also has several difficulty settings. If you beat them they open up tougher versions for you to try your hand at. Including a No Death Run mode where you can attempt to beat the entire game on one life. Yes, many games have added this feature as well, but it does still give a devoted fan something of merit to shoot for. This game, in particular, is one of the toughest games to employ this. Even on the lower difficulties, it can be pretty easy to lose lives when you get sandwiched between mid-card enemies or go up against some of the cheaper bosses. So expect to have nerves of steel should you want to attempt a no death run on the highest of challenge levels.

As for the gameplay, it’s classic Streets Of Rage. Lizardcube has gotten nearly 1:1 with the feel of the older games. It felt closest to SOR2 for me, though I’m certain any superfan who disagrees will tell me why I’m wrong. Be that as it may, it is a beat ’em up. On the surface level, it might seem like “Go right, and mash punch” is the only thing you do, but on further inspection, it really isn’t.  Streets Of Rage 4 has mostly pretty good hit detection, if you miss, you likely weren’t close enough or were too far above or below the enemy for it to land. This follows a lot of the classics. Attack diagonally, and try to get in grapple moves for big damage. Though every enemy in the game needs to be approached differently. One enemy type may deflect or reverse holds. So you’ll have to punch them a million times. Other enemies are blocking happy so you have to bait them into whiffing an attack. And yes, you can expect the A.I. to employ the classic brawler bull of sandwiching you between four bad guys that interrupt you when you’re beating up one of them. But figuring out ways around it are a staple of the genre.

The thing is, with all of the tools and variety it doesn’t feel old or repetitious. The game also doesn’t wear out it’s welcome. It’s a relatively short game. One that honestly ends almost too abruptly for me. I would have liked to have seen some more stuff fleshed out. While this isn’t a game you’ll come into looking for a deep storyline, it does feel a bit too superficial. Outside of a little bit of exposition, we don’t get much about the new crime boss duo. We don’t see how or if Mr. X died. We don’t see how the kids come to power. It’s kind of like “Hey! Our dad is gone, but we’re taking over.” And the abrupt finish to it puts it a step below vintage brawlers in this regard. Again, B movie stuff, but even the old games in the series along with Final Fight, and Double Dragon did this a little better. Not by much. But enough that it’s noticeable. 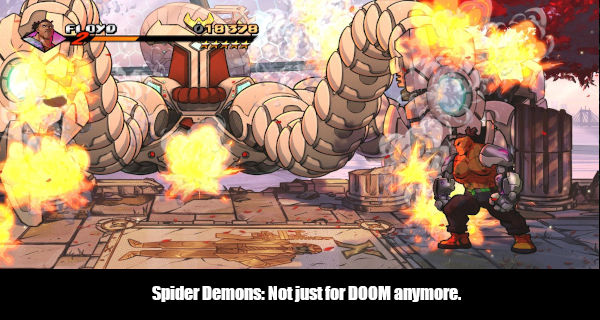 That said, at this level, I’m really nitpicking. Overall, I rather enjoyed Streets Of Rage 4. There’s enough here for the old-timer teens of the 90s to love, and for those who are newer to enjoy as well. It’s as silly and over the top as always while letting you feel like a badass the entire time. And it’s a cut above some of the other beat ’em ups that we’ve seen recently.  Whether you’re a long time fan who has waited for eons for this release, or you’re someone not experienced with Beat ’em ups looking for something new this is one worth picking up.