Over the last decade, there has been a slew of independent studios bringing us amazing platformers. Many of them taking elements of the mega-hits of yesteryear and working them into their projects. Sometimes in new ways, other times in a sendup. Today’s game is actually a sequel of sorts. Not only is Collectorvision an independent developer, but they’re also well known in the world of homebrew.

CONS: No volume options to speak of. Backtracking elements kneecapped.

SMURF YEAH: *Not* Gargamel has a surprise for you.

Sydney Hunter has been known for a while in the homebrew community. For those who don’t already know, a sizable number of developers continue to produce and sell games for long-defunct platforms. From the Atari 2600 to the Intellivision. From the Vectrex to the Dreamcast. New games come out for game systems that haven’t been on a store shelf for purchase for decades.

Collectorvision made Sydney Hunter games for the Colecovision, Intellivision, Commodore 64, Sega Master System, Super Nintendo, and others. For years now he’s been an underground mascot star. Like a hardcore band that finally gets some mainstream attention, Sydney Hunter has finally gotten his MTV moment with this game. 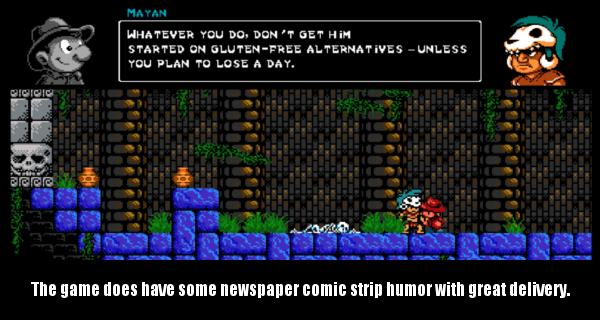 That’s partly due to the work John Lester of Gamester 81 fame has done for this title. Not only did he pen the storyline elements and collaborate with the team on character design he tirelessly promoted the game at conventions. Especially shows that focused on the Retro games’ scene as the earlier games were made for retro platforms.

The final game we have here is going to appeal to far more than the core fanbase that has been playing the previous games on their old Colecovision and Super NES consoles. Because it does a lot of things right and excels at all of the most important elements. There are a couple of problems too. But even the best games have some of those right? That said, the pros here are well worth the price of admission. There are some of the best elements of games of yesteryear here peppered in with some honestly funny dialogue.

The setup here is that Sydney Hunter finds himself looking for treasure in old Mayan ruins where he sees a mysterious arcade cabinet which disappears shortly thereafter. He ends up having to figure out what exactly is going on. After finding some tablets in the game you’re able to understand what the inhabitants are saying and from here things become far more understandable. There is a rogue diety that as broken up a giant stone calendar into several pieces and recruited key people to guard them as they set their plans into motion.

The structure of the game puts you into a hub world where there are a number of different entrances. Each of these leads to a different stage. It’s pretty much akin to the portraits and paintings in Super Mario 64 doubling as doorways. In any event, each stage requires a certain number of crystal skulls to enter. Every stage in the game is a labyrinth of sorts. Some are a little bit more linear than others and none of them are as convoluted or as involved as something like Metroid. Be that as it may some of the aforementioned crystal skulls you need to pick up are hidden off of the beaten path. So you can expect to spend a lot of time searching around for them.

Often times there are hidden paths you need to uncover in order to search for these skulls and other secrets or items throughout the game. There are also several locks of varying colors in most of the stages. These require keys to the corresponding color. Some of these are in plain sight while others are hidden like the crystal skulls. In order to find some of these hidden paths and hidden items, you’ll need new weapons or items. When you first start the game, Sydney is armed with only a whip. But over time you’ll find boomerangs, spears, and a myriad of items to help you progress.

On top of that, you’ll find beverages to restore your health and a lot of jewels that can be used in the hub world’s shops as currency. The exploration isn’t as involved as something like Metroid, but that doesn’t mean that there isn’t any depth to it. it feels a lot closer to something like Pitfall! but with a dash of Montezuma’s Revenge thrown in. The platforming has a floatier feeling than most other bump n’ jump style games of yesteryear. That said, there are elements of NES stalwarts from Capcom and Konami’s time on that console. The combat in the stages clearly feels inspired by Castlevania, while Boss encounters combine that feeling with elements of Mega Man and Disney’s DuckTales. 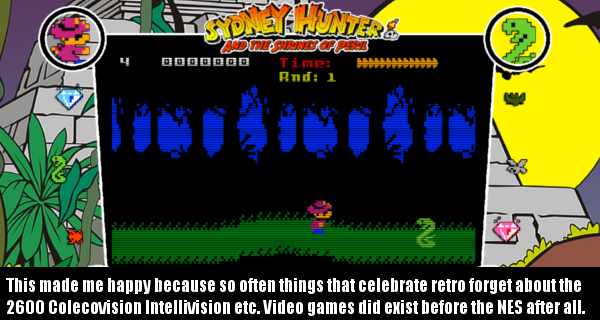 At one point in the game, there’s also a nod to a licensed title that appeared on the Colecovision and Atari 2600. Smurf: Rescue In Gargamel’s Castle. At one point the folks at Collectorvision had hinted at an aftermarket port of that game to the Intellivision, and with this nod having a similar visual style to the games on that console this could be an inside reference. Still, even if you’re uninitiated with the Sydney Hunter series, the similarity to a certain licensed game from 1982 is undeniable and is quite welcome.

Reference humor aside, the game does have some pretty funny dialogue as you talk to NPCs, and whenever Sydney is about to confront a boss. These sections move the story along, but also make some observational comedy. It’s the sort of humor you find in a lot of the more popular newspaper comic strips of old. But about modern things and retro games. On your initial playthrough pay attention to it. It does pretty well most of the time.

I did have a couple of problems while playing the game though. The first one is that there are absolutely no sound or audio options. Live streaming my playthrough was hindered by this as I had to really tinker with my streaming software to find a balance between game audio, and my microphone audio. I also had to tinker with my settings in Windows to fine-tune it. Simply having sliders for Game music and Game sound effects would have made this far simpler to avoid. Even if you aren’t a streamer it will annoy you when you have to scramble to find your TV remote or Alt+Tab to your desktop to get to the volume options in the event you don’t have speaker volume at your fingertips.

The other major issue I had was finding there were a couple of times in two of the stages where I realized I was going to have to backtrack to find a key to move forward. The trouble was in these instances there was no way to do so. So instead I had to walk into a chasm and die to force a restart at the last checkpoint so I could redo what I did properly, then go in a different direction to hunt for the key first. Nothing that made the game bad by any means. But it was an annoyance. So it is something you may want to keep in the back of your mind.

That said, this game pretty much gives you unlimited lives and you can go along at your own pace. Be that as it may, the game isn’t a cakewalk either. There are definitely a few moments throughout the campaign that will give you a challenge you’ll feel good about overcoming. Some of the bosses will confound you the first several times you die fighting them. But over time and repeated attempts that light will go off. “Oh, THAT’S what I need to be doing.” You’ll tell yourself then go onto win the day.

Ultimately, Sydney Hunter and the Curse of the Mayan is a really cool game. It has some very fun and nostalgic gameplay notes. It nails the NES aesthetic it’s going for as well as the Intellivision aesthetic when it comes up. The Famitraker soundtrack by Ben Allen is also really awesome. It blends the tribal element you would expect a game in this setting to have but then melds it with that classic NES sound few games not published by Capcom, Konami, or Nintendo themselves could match. And while I can’t say the tracks are as memorable as some of the ones in this game’s peers (Shovel Knight or The Messenger for instance) It is still an excellent OST that is worth experiencing. In fact, you can buy this OST from Ben Allen himself!

In a competitive crowd of games that use the NES aesthetic, Sydney Hunter really stands out. Like an Indiana Jones film, there’s a fair amount of variety. Adventure, exploration, some combat and even a few somber moments. If you’re looking for a new platformer to get into, check this one out. It has a couple of bumps in its road, but it’s still a road I can recommend traveling down.