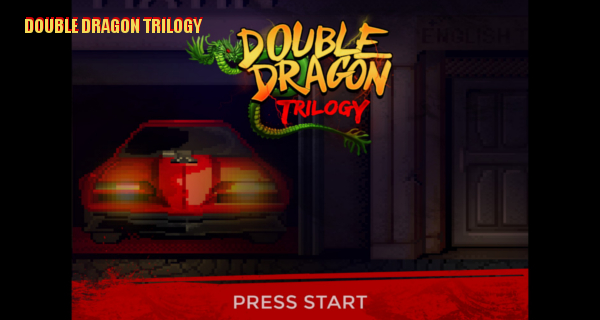 DotEmu brings the three arcade classics to PC after a quick run on mobile devices.  But before you let the nostalgia take over your senses, and pick it up without question read along. There are a few caveats you need be aware of.

PROS: Emulations of Double Dragon 1,2, and even 3!

Ah, Double Dragon. What child of the 80’s didn’t play it? It was ported to nearly every possible platform of the time. Some versions like the beloved NES trilogy making wild changes to the stages. While other versions like the Commodore 64 port staying closer to the arcade game. (At least in layout. As you’ll see later.) None of the versions came close to the arcade machines though. The NES, and Sega Master System were probably the closest in terms of gameplay. You had access to all kinds of moves, even if you did have to level up in the NES port to use them. The other versions either didn’t get the controls right, or had to make other sacrifices for memory constraints.

The C64 port made you fight bad guys one at a time, and characters had no waistline. Torsos honestly floated over legs. The Atari 7800 port wasn’t as bad as some of the others, giving players play control that came closer to the Sega Master System’s version. But in this case, Activision (who had porting duties for Atari consoles) couldn’t quite pull off the same smooth animation. Atari’s decision to cut corners by using the 2600’s sound tech also meant the 2600 version’s soundtrack would play. The fact the first game even made it to the 2600 in a barely playable state is something of a miracle. Seriously, look it up sometime. 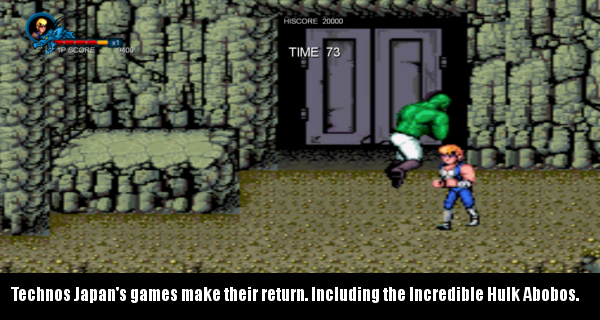 Anyway, many of us enjoyed the NES versions, or found some fun in one of the other versions. Even the bad ones, begrudgingly so. But it was a rare treat to go to the arcade, and play the arcade version. Double Dragon II was an even bigger hit. Double Dragon 3… not so much. The point is, in those days the arcade versions weren’t entirely possible at home. So many will feel an instant sense of joy when they see these games are available to purchase legally on their computer. Unfortunately, there are a few problems here that might just deflate the excitement. Let’s get the good in here first though. All three games are by most standards emulated pretty well. They’re essentially the arcade ROMs, packaged in a nice bootable emulator.

All of the games are the same quick romps, and they bring along all of the good, and bad things they had back in the day. The games also can be played with easy enemies that go down in a punch or two. Harder enemies that fight with more health. Then the impossible enemies arcades likely enabled to suck out more of our quarters. Double Dragon II also lets you play with either the consistently reversing, punch, and kick button layout or the straight forward punch, and kick button layout. For those too young to remember DDII, or those who have forgotten the game had reversed buttons. To explain it better, when facing right, the punch button was a punch button. The kick button was a kick button. But when facing left, the kick button became the punch button, and the punch button became the kick button. It was set up so that kicks would always be back kicks. For whatever reason someone thought that it would be a great idea. The reality is, that for most people it was just confusing. This also carried over to the NES port. So if you’ve played that version, expect the same thing here.  But again it is nice that you can disable it here. Some players simply won’t wrap their heads around it, and so this makes things clearer. 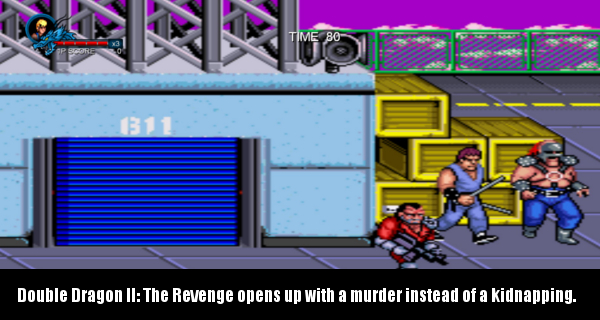 Double Dragon II also added a couple of new moves, most notably a hurricane kick. If you press attack at just the right moment after jumping, you’ll spin in the air. If you hit an enemy with it you’ll deal a lot of damage. Which you’ll need to do when you get to the end of the game to fight the final boss. Double Dragon II was one of the series’ highlights. Double Dragon III was its biggest downfall. The game tried to go for a more digitized look, which to be fair, did look nice. But the machine had two major problems. First, it had some severe slowdown at seemingly random times. This made an already difficult game that much harder. Second, the game required you to go into shops to buy items to make the game more manageable. Shops that took actual quarters. So if you wanted to add a larger life bar, access to additional playable characters the game touted, or weapons you had to put in more money. The game was a huge cash grab, and resulted in a lot of resentment from fans. Outside of these problems the game could be enjoyable, but without a lot of tokens on hand you probably weren’t going to finish it. 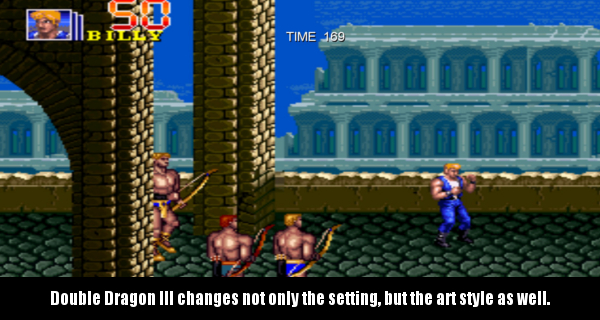 Which leads me to something that is going to bother a lot of people when they try this collection out. The games have all been retooled to allow for just three continues. This was probably done to make these games challenging, like the reworked NES versions. But in the process they’ve removed the immediacy of the arcade experience. A lot of players back in the day wanted to win. Of course many tried to complete these games on a quarter. But a lot of players spent a couple of dollars doing so. That feeling of instant gratification is gone now. And while the case could be made that Double Dragon 1&2 feel a little bit closer in challenge to their NES counterparts, Double Dragon 3 is the worst affected. Because it was a game designed around the concept of paying to win. Without spending money in shops it becomes nearly impossible for many people.  The continue limit effectively means that even visiting a shop one time, can lead to playing with no continues. Basically you’ll only want to buy extra lives, and that’s once per level. Even on the easiest setting, some won’t be able to clear the game because of it. 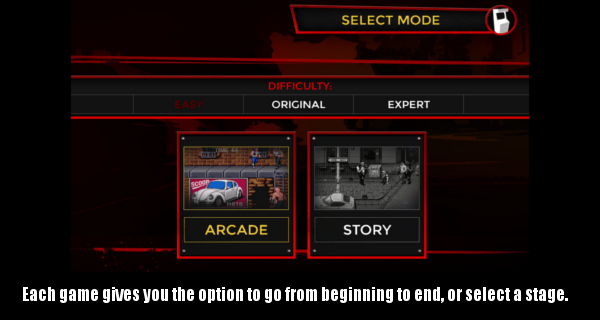 The bundle also doesn’t seem to properly set the aspect ratio of these games. If you go into the settings, and set the resolution to 1920×1080 menus seem sharp. However the actual games will have a muted look to them. It appears the games are “stretched” to fill the screen, rather than being rendered in full screen resolution. Or displayed in the center of the screen under the proper aspect ratio. Control options fare better.Thankfully you can re-bind all of the keys on either a keyboard or a gamepad. Outside of the barebones video, audio, and control options there isn’t much to speak of. It would have been nice to have options for filters to mimic an arcade monitor. Or the option to turn on free play, or at least the option to simulate putting in quarters by pressing a button.

The last major problem here is that the collection appears to have a glitch that doesn’t show the game endings should you beat the games. It also skips the intermissions of the third game! It’s true that arcade versions of these games didn’t have particularly deep endings. Double Dragon, saw you save Marion. The sequel saw you looking at a photo, reminded she was killed, and that your revenge didn’t bring her back. The third showed you donating Cleopatra’s treasure to charity. (Yes. Really.) But if you spend any time enjoying these titles, and succeed in winning, you’ll still want to see them. To its credit, DotEmu has said on the Steam forums it is looking into that issue. On the plus side, all of the games again, play as you remember. Animations are the same, the responsiveness of the controls, and chip tunes you remember are all here. You can also play the games in their entirety, or choose to level skip. Level skipping gives you a set number of lives with no continues however. So you’ll probably only do it if you get stuck on a certain stage or boss character. 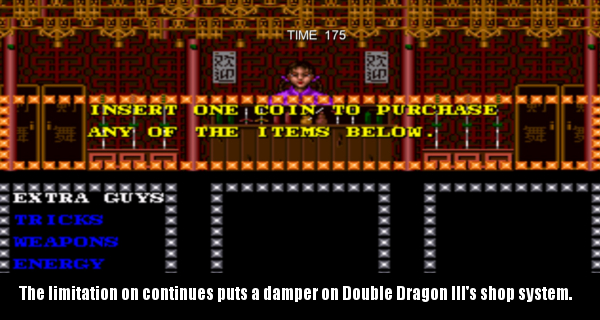 I know it sounds like I’m really ripping into this collection here. I really wish I didn’t have to. Trust me, the first two Double Dragon titles were great. Especially for those who loved playing them in arcades, bars, and laundromats back in the day. The third one, while not as fun is still part of an important franchise in the world of brawlers. It’s just too bad that these changes bring along so many inconveniences along for the ride. If the games came with a free play option for those who wanted it, scaled properly, and had the endings intact this would be a must buy collection for any retro gamer. As it stands, it’s a decent collection for die-hard Double Dragon fans who don’t have hundreds of dollars for the actual arcade machines. If you can deal with the limited continues, and bugs you’ll have a fun time. For those who need absolute flawlessness, you might want to wait, and see if improvements arrive.