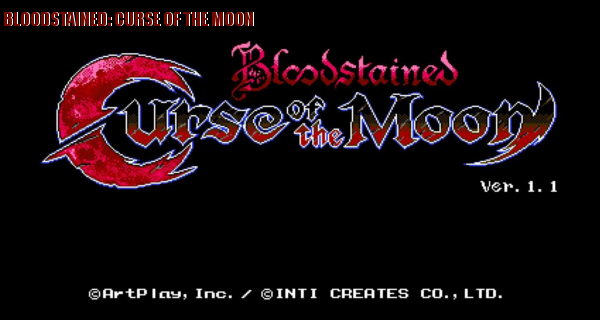 Ah, Konami. These days it’s become fashionable to belittle their games with good reason. But that’s partly because they used to be one of the kings of game publishing. From Pooyan to Gyruss. From Gradius to Contra. From Crime Fighters to Metal Gear. From Quarth to Super Cobra, this giant has scores of legendary games under its umbrella. But over the last decade there has been a shift in its focus. One that has led many of its best known talent to leave the company. Most know about Hideo Kojima’s departure. But less known is Koji Igarashi, the man behind many of Konami’s better Castlevania games. In 2014 however he would leave the company as he felt his console roots weren’t a good fit for the company’s shift toward mobile phone, and tablet games.

Taking some inspiration from what Keji Inafune had done after leaving Capcom, Igarashi, also took to Kickstarter to raise money for a new project. Bloodstained: Ritual Of The Night. This was a successful enough endeavor that today’s game, Bloodstained: Curse Of The Moon came out of it as a stretch goal for backers. For the rest of us, it’s an indie game inspired by the classic game series its producer worked on. It may sound like a familiar story. But is it one of the ones that ends as a success?

CASTLEVANIA VETERANS: Will wish you could start with Miriam.

Bloodstained, truly does take many of Castlevania’s mechanics, tone, and visual flair to heart. In fact, this game plays nearly identically to Castlevania III: Dracula’s Curse. That game had you playing as the protagonists ancestor, with the mechanics set up in the original NES version of Castlevania as a baseline. From there it added other characters you could choose to join you, and depending on which path you took through the game each had specific roles. This was to give you an incentive to go back through it multiple times. 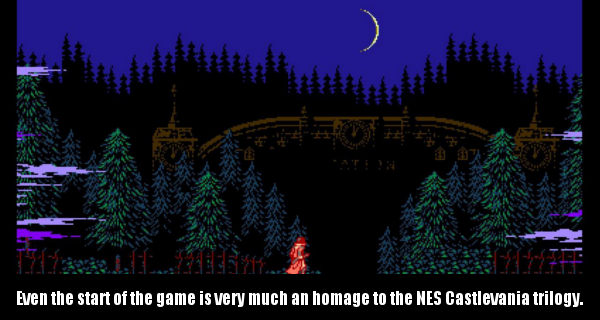 This game is very similar in its approach. Except that to set itself apart, you aren’t a vampire slayer. You’re a demon hunter named Zangetsu. You’ve been cursed by a powerful demon, and so you’re on a mission to find, and kill him in order to break the curse over you. You also don’t use a whip. Zangetsu is armed with a sword. So unlike Castlevania, you won’t have the range you’re likely accustomed to. What you will have however is the same walking speed, and knock back from the NES Trilogy of old. You’ll also find yourself facing very similar attack patterns as in those old games. Sure, the bats, and Gorgon heads may have been replaced with new faces. But you can still expect those wavy patterns over pits, and other traps that will make traversing a trial.

You may not see two dragon heads stacked, spitting fire. But there will be an equivalent. There may not be a chain of skeleton bones, and a lizard skull coming out from a wall. But here will be something similar. The list goes on, and on, and on. As the story, and stages progress you’ll meet other characters whom you can choose to add to your party. Miriam is the Simon Belmont clone you’ll wish you started the game with. She has a whip that works very much the same way, as Simon’s. This gives you that sweet balance of ranged, and melee attack power, and familiar gravity when jumping or walking off of ledges.

Later on you’ll meet Gebel, this game’s take on Alucard. He’s also a vampire, and you can also turn into a bat as him. Finally, there’s Alfred who is a magician. He’s also elderly, slow, and has a fairly small health meter. He attacks with a small cane at essentially point-blank range. As in the Castlevania games, there are candles, and other hanging objects you can destroy for items. Some of these are ammo for special weapons, while others are weapons themselves. What sets this one apart a little bit is just how different each character’s weapons are. No special weapon is represented twice. There are a set exclusive to each character. For instance, Miriam can have a spinning disc attack that goes back, and forth. Alfred on the other hand can get a weapon that lets him turn enemies into ice blocks he can then jump on, or have another character jump on.

There are all sorts of possibilities. The other thing is that each stage, even the earliest ones all have branching paths in them that only specific characters can go to. You may need to switch to Gebel so you can turn into a bat, and fly through a small gap for one path. You may need to slide under something for another, and so you’ll have to switch to Miriam. This sort of mechanic gives the game a lot of replay value, as in order to see everything each stage has to offer you’ll need to try each of them with the applicable characters.

The thing is you have more options with them than you do with the ones in Castlevania III. What I mean by that is, you don’t drop one when you meet the next. If you choose to take one along for the ride, they stay with you the entire game. The game can be quite a challenge too, especially near the end of the game. So having all of the characters working together makes defeating Gremory, the leader of the Demons, more manageable. However, what makes the game worth playing over again even more are the multiple endings. Depending on which characters you take along, or leave behind you’ll get different outcomes if you clear the game. 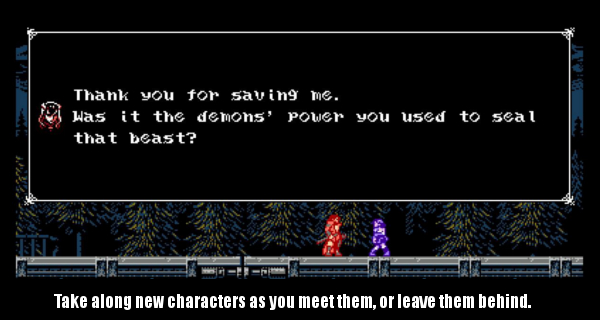 And beyond that there are a few difficulty settings. You can play the easiest setting if you just want to go through the game at your leisure. It reduces the knock back so it isn’t as cruel as the NES Castlevania trilogy could be. It also gives you unlimited lives, so you also won’t see the continue screen. But the veteran mode is the hardcore NES game difficulty you remember. Or if you’re too young to remember, but want to experience anyway. Getting knocked back into pits, crumbling bricks, rotating trap floor tiles. It’s all here. Clearing this will unlock an even harder mode though. So the absolute biggest Castlevania transplants will want to check it out, as it makes an already tough job more challenging. 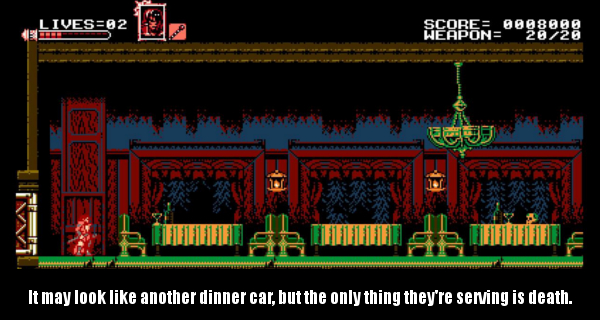 Visually the game also follows the Castlevania III mold. It has a very similar color palette, and a very similar pixel art style. This isn’t to say everything is exactly the same. There are background animations, and graphics based puzzles the old Konami games don’t have, and a slew of special effects the old 8-bit 6502 chip variants, and accompanying graphics chips simply can not do on display. The music in it, and synchronization with the cinema screen animations are spot on too. It sounds very much like a Famicom console game through, and through. Inti Creates has done a phenomenal job in the graphics, and sound department with this game.

But all of this success might be a little too successful. In being so close to the Castlevania NES fill in so many wanted, it doesn’t retain its own identity as much as it needs to. Other than Alfred, the main characters are very much your Simon, Sypha, and Alucard stand-ins. As detailed, and beautifully laid out as the stages are, they could easily be mistaken for an NES Castlevania outing. The mini bosses, and bosses are where the game really begins to turn the tide on this a bit though. These are great multi part affairs that don’t look they would necessarily be in one of Konami’s games, but fit this spiritual successor at the same time. The game also has a handful of minor bugs in it. Mostly collision based bugs. There were a few sections with crumbling blocks designed to make you lose a life if you fail at navigation. At one point I fell, but landed safely in an area where I had to jump to my doom anyway. There was nowhere else to go. Some of these seem to be helping in speed runs. But for the rest of us, they’re the rare inconvenience.

Still, beyond these observations I really enjoyed playing through the game’s many stages. Anybody who loves the old school Castlevania games probably owns this by now. But if for some reason you don’t, it’s an absolute blast. It’s a truly great action-platformer with some great obstacles to overcome, and some of the best boss fights I’ve been in. I only wish the game did a little bit more to make it feel unique. Sure the main protagonist doesn’t use a whip, but before long another character does. Sure, you’re fighting an army led by a demon, rather than Dracula. But that army still has a lot of skeletons, and zombies in it. Hopefully the upcoming Ritual Of The Night will address this while continuing to do everything else as well as this game does. Be that as it may, Curse Of The Moon is still a keeper.