Back in 1989 those of us with an NES likely had a copy of River City Ransom. It was a landmark game in that it was one of the earliest games to meld the Beat ’em Up genre with RPG elements. It was made by Technos Japan, who were mainly known for the Double Dragon games by that point Stateside. But RCR was a port of the third game in their Kunio-Kun series. In Japan the main character appeared in several games. Many of which would appear in the USA but with many alterations.

River City Ransom was pretty popular in its heyday. While it was never as beloved as Technos’ Double Dragon games, it was a game that had a Nintendo Power feature back in the day. It was a game many people fondly remember playing, and its one you should have in your collection if you don’t already. For those with a Switch, it’s included in the NES game bundle you get when you buy the online service.

PROS: Everything great about the NES original, and then some!

A while ago, Arc System Works acquired the Technos Japan assets, and began making games in these classic series. They made Double Dragon IV, and here we have a new entry in the River City Ransom series. Created by Conatus Creative, and published by Arc System Works, River City Ransom Underground continues the saga. All with the same blend of Beat ’em Up, and RPG conventions the original was known for, and lauded for.

It’s also a direct sequel. Taking place nearly 40 years after the NES game, River City Ransom Underground begins with a prologue mission where Alex, and Ryan have to once again defeat Slick. The leader of the most ruthless gang in River City. Shortly after this epic battle Slick goes to prison, and River City High School explodes. After this mission ends the game fast forwards to present day, and we are introduced to some new characters in the process. 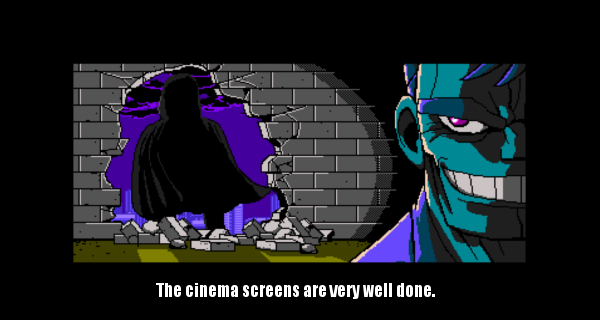 It seems that while life might have improved for the characters at the end of the original game, it didn’t stay that way. With a new River City High School, came a plethora of new gangs, and the resurrection of the original games’ gangs. And with that, River City Ransom Underground truly begins. This is a modern continuation of a game, that really understands what made the original so great, while also building upon it.

As I mentioned before, what really set the original RCR apart from other games of its ilk, was the inclusion of RPG elements. Not only did you have to beat the snot out of people to survive an area, you had to do it to level up. It wasn’t enough to level up either. You had to find dojos where you could buy new moves, or shops where you could buy food. This game continues that tradition. You can fully expect to spend hundreds or even thousands of dollars you steal from fallen enemies on this stuff. And spend it you should, because learning advanced techniques, and stocking up on cheeseburgers is the key to victory. When you first start out of course you’ll be relatively weak, and you can expect to die quickly. But over time, as you put muggers, bullies, and nearly every High School student stereotype in the hospital, you’ll grow stronger.

And you’ll be backtracking to earlier areas for new items, or new paths that open up later. Again, an element that feels very much out of a Role Playing Game. This entry also adds a number of things to the formula. For starters, there are a large selection of playable characters. Many of these are new to the series, as this story introduces the next generation of descendants to us. So you’ll find many new teenagers out to rid the city of evildoers. But throughout the story you’ll also meet characters from the original game like Alex, and Ryan. There are also other characters old, and new who will join the roster if you defeat them in glorious battle. This adds a bunch of replay value to the game too, because of how differently each of these characters plays. Some of them are slower characters that rely on grapples, and holds. Some of them are ranged attackers. Others are brawlers that retain that old-school play style you expect from a Beat ’em Up genre title.

On top of this, the game allows for up to four players to go through the campaign together. So now you can add an even bigger sense of frustration if one of you in your circle of friends is worse than everyone else. Or a sense of camaraderie if you’re all fine with each other’s level of ability. But to be honest even when playing with less skilled friends, this game is still a lot of fun. Between the action packed brawling, there are stretches of time where you’ll be exploring for new story missions, or events.

The game also has a day, and night cycle in it. So some of these only happen at specific times. If a certain boss you need to kill only shows up at night, you can’t really head to fight them during the daylight. You’ll have to spend the daylight hours doing something else entirely. But this works to your advantage, as it gives you time to check out shops, restaurants, and dojos. Keep in mind however that even these are built around the game’s clock. Stores have their own hours. So if it’s 10pm in the game time, you’ll have to skip that trip to the game store. Hit up the burger joint instead.

Of course as alluded to, you get money by fighting bad guys. When you knock their teeth in, they drop cash you can then pick up, and hoard. You can also get money by punching parking meters, or certain vending machines. Be careful though. Because another new feature in this one is borrowed from a place you wouldn’t expect: Grand Theft Auto. If you should accidentally injure an innocent bystander in your pursuit of street justice, they will call the cops on you. If this happens you’ll see a badge show up with a timer, and you’ll be facing the cops until it gets down to zero. Not only that, but if you resist arrest instead of running away, and lying low they send tougher officers after you. Beating up the police also gets you news coverage, which also beefs up the calls for backup. 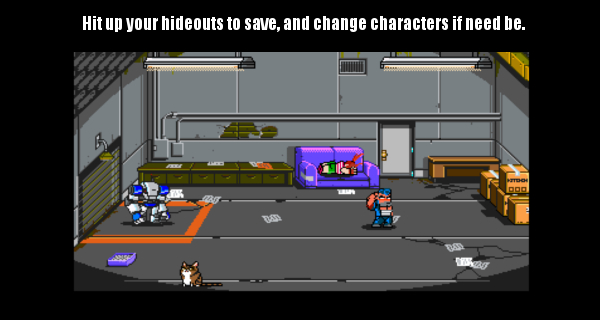 Over the course of your adventure you’ll also find hideouts. In these secret (and not so secret) areas you can manage inventory, change between characters, look at achievements, and save your game. It’s also useful for getting a more detailed description of your current objective, as you can read the last bit of dialogue without it going by too quickly to be able to finish it. The game also ties the worlds of Technos Japan’s big two franchises River City Ransom, and Double Dragon together. How? By featuring copious amounts of Abobo. Double Dragon’s epic villain shows up a number of times throughout the campaign, and even plays a role in the story arc I won’t delve into here. 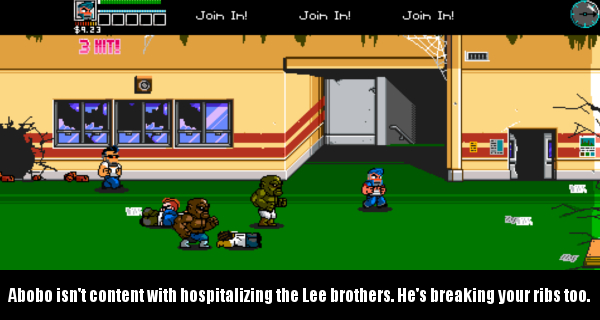 Another aspect of the game that you’ll love is just how funny it is. Whether it’s a well-placed reference joke, or genuinely funny dialogue the game will make you laugh. And it isn’t really self-parody most of the time. Although there are a number of times where the storyline in the game involves gags that are over the top, they still fit the world. They’re still in line with the humor found in the original NES game. The aesthetics of the game also play into this too. the pixel art is an obvious homage to its 8-bit era origins. But it’s also retained the humor. Characters have exaggerated expressions. They have animations that follow along with the theme. They look like they belong on the NES. But the advanced number of frames, and level of detail in the background animations obviously couldn’t be done on the little toaster that could. There are also a bounty of Easter Eggs, and appearances from characters in indie games.

The soundtrack is very good. While not every song can live up to the lofty bar of the original game, there are plenty of them that do. Expect to hear some great up tempo chip tunes, with many catchy hooks. There are also slower, ambient songs in areas that call for it. There’s enough variety here for everyone though you’re going to be so busy you may not have time to truly appreciate it. 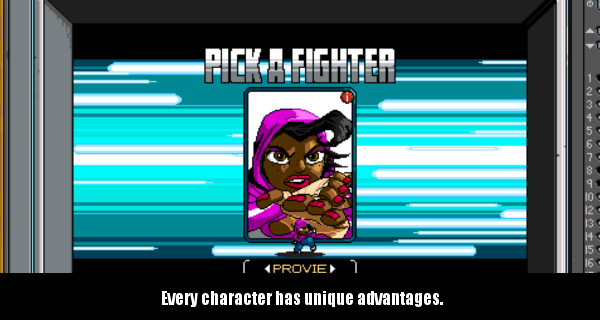 There are a couple of minor issues with this game to be aware of. The PC game has one technical issue in that initially only the Xbox 360 controller is seen by the game. If you set the controller options in Steam to whichever controller you want to use however, then the Steam client will override the game allowing it to be played with whichever controller you’ve selected. The only other issue is that near the end of the game you’ll have to go through a massive gauntlet with no major save point in between. The game isn’t impossible by any means mind you. But this artificially increases the difficulty in the last act as a result. Be sure to stock up on items before tackling it.  The saving grace is that some previously locked doors stay open if you fail. There’s a couple of annoyances during missions where the map doesn’t always make what you’re supposed to do clear. There’s the fact that you lose half your money when you die. But in all fairness the old game did this to you too. And if a quest ends with a boss fight grin, and bear it. Because if you go back to a hideout to save you’ll have to do it all over again anyway. 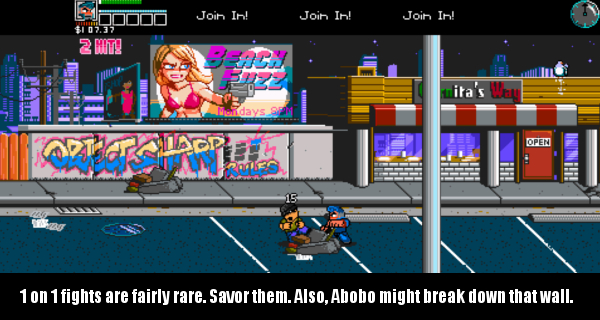 Beyond that, though this is a very entertaining, and interesting sequel of sorts. At first things may seem insurmountable, but after a few deaths, you’ll eventually begin to level up your characters. Then sections that were once almost impossible will suddenly be fairly easy. Allowing for four players makes the game even more fun than it already is, and the solid game play solidifies it. The wide variety of playable characters also adds a lot of replay value as you’ll have to approach each wave of enemies very differently. In short River City Ransom Underground is a wonderful game even if it can be a little rough around the edges. Surprisingly it’s the only River City game not on consoles as of now. But there are ports for Apple, and Linux available for those with computers that aren’t running Windows. The game can also be found on GoG. as well as Steam.