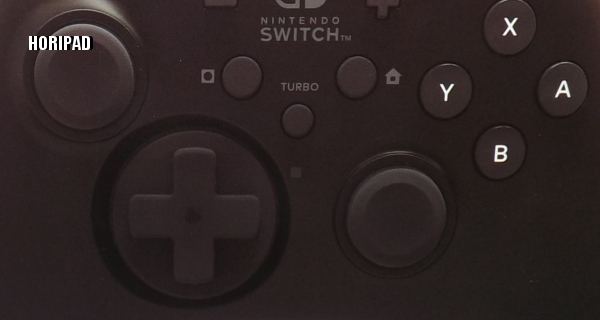 The Nintendo Switch is a great console, that plays a lot of great games. The controllers it comes with, while innovative, aren’t always the best option in every scenario. On the go, they’re great. They’re small, compact, and you can divide them to make two controllers. But at home, those two joycons are likely going in the comfort grip. So when a friend comes over, or your significant other, spouse, siblings or roommate want to play with you, what to do?

CONS: Doesn’t have the gyroscopic functions.

There are a surprisingly high number of controller options emerging for Nintendo’s gaming tablet. Obviously Nintendo’s own solutions are pretty great. You can roll with another set of joycons, which will double as two controllers, and that gets you set for four player games. But you have that small size issue which in a home setting, and on certain games may feel cumbersome for larger hands. You can also go for Nintendo’s Pro Controller. It’s nice, does everything the joycons can, and it’s got a hefty, yet comfortable design. But it also costs more than a lot of games do the day they come out.

For a lot of us, buying a Pro Controller for ourselves, or to have on hand for a second player, may be cost prohibitive. There are a wealth of third-party solutions coming out now to address this. But many of them have lackluster build quality, using cheap plastics or sub par wiring. Enter the Horipad. Hori isn’t generally known for what most might call general purpose controllers. They’re known for expensive, professional grade arcade fighting sticks. Go to any local Street Fighter or Tekken tournament, and you’ll find a lot of arcade joysticks made by Hori.

Anyway, the Horipad is a pretty good solution for anyone looking for a controller for a second player, or to leave connected so they don’t have to take the joycons off at home. It has a solid build quality. It doesn’t have the heft of Nintendo’s own controller, however it doesn’t feel brittle, and thin either. It feels about as solid as Microsoft’s own Xbox 360 controllers did.  The thumb sticks feel really comfortable, and all of the buttons, and triggers are very responsive.

Beyond that, the controller also has the +, and – buttons to pull up menus. It has the home button, and even included the screen capture button. Hori even put a turbo button into the controller, and it works wonderfully. Simply hold a button down, press turbo, and it will just rapid fire along when you hold it from that point on. Let go of everything, press the turbo button again, and everything goes back to normal.

Frankly, this would be an utterly flawless solution if not for a couple of things. The worst is the lack of gyroscopic functions. This means that for a handful of games, you really won’t be able to use it properly. Super Mario Galaxy, for instance, requires gestures for some of the moves. Using the joycons, or pro controller won’t be a problem, as you can swing or shake them when needed. You can’t do them with the Horipad. The pad does work in Splatoon 2, but you won’t be able to use mouse-look like you can with the joycons or pro controller. There aren’t gobs, and gobs of games that require the gyroscopic tech. But if you buy one, do know you’ll have to use the joycons. I do applaud Hori for mentioning this on the back of the box though. It’s nice to know this going in.

The other thing some won’t like is the D-pad. Rather than get rid of the C-buttons, and put a traditional D-pad in their place, they kept the C-buttons. The solution they came up with was to put a peg hole in between the buttons, and make a D-pad that plugs into it. It does work fairly well. In most games that benefit from a D-pad this works fine. Press “Up”, and get the desired result. However it ends up feeling like the D-pad on the original Xbox 360 controller.  So it isn’t quite as good as a dedicated D-pad but it’s still an improvement over the C-buttons on the  left joycon. 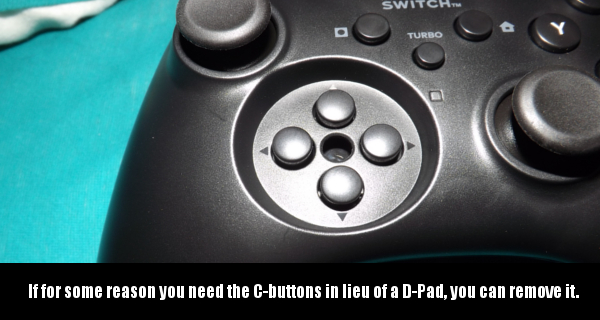 But there is one really, cool thing about this controller, and that’s its versatility. You can also use this on any Windows 10 computer. Plug it in, and it is seen no problem. However the buttons are still mapped as if you were playing on the Switch. So in games where you’re used to using Microsoft’s layout, you’ll have to go into the menu, and re-bind keys. The overwhelming majority of PC games let you do this. But the bottom line is that, you can repurpose this as a game pad for your PC. Which means although you’re getting a second controller for your Switch, you don’t need to buy an Xbox or Steam controller for your computer. Assuming you haven’t already.

All in all, this is a great all around controller for the overwhelming majority of games on the Switch. Especially if you want something a cut above most other third-party controllers in terms of quality while still coming in at a budget price. Those who require a traditional D-pad might want to look at other solutions. But again, this is still a cut above the build of a lot of third-party solutions. The fact that it can also be used as a PC game pad is also a really great feature. It’s also a really comfortable fit for about anybody’s hands. About the only major drawback is the exclusion of the gyroscopic features seen in Nintendo’s own Pro Controller. Be that as it may, you can get two of these pads for the cost of Nintendo’s wireless one. For someone who needs a solid controller at an affordable price, the Horipad is a contender.