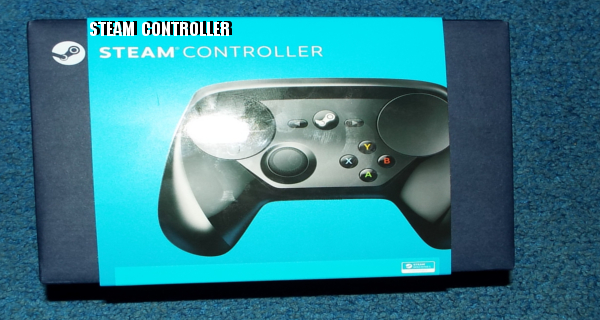 A few years ago now, Valve unveiled its plan to get PC’s in the living room. This wasn’t an entirely new idea. OEM (Original Equipment Manufacturer) PC Builders have tried this for years with a handful of minor successes. The late, Gateway had its Destination series. Hewlett-Packard built a line of computers with cards that could output to TVs. Dell attempted it, even boutique companies have tried this before partnering with Valve.

But Valve wanted theirs to be a little bit closer to a mass market attempt, rather than an entirely niche one. It was, and is an attempt to get more console owners to try gaming on a computer. After a number of delays, their Steam machine partners have put out these Home Theatre PCs. One of the key differences is past attempts from other companies were Windows based, where Valve’s partners are using Valve’s Linux based Steam OS. The other part of Valve’s plan however doesn’t involve a Steam OS based computer. It’s centered around a versatile new controller.

PROS: Versatile. Comfortable. Compatible with most anything on Steam.

CONS: Not quite as simplified for games not on Steam.

ELABORATE: The packaging is very ritzy.

The beautiful thing about the Steam controller is that you don’t have to have a Steam machine to use it. It will work with pretty much any computer made in the last 15 years. Provided of course you are on at least Windows 7, Mac OS 10.10 or Steam OS, and have a Steam account. Outside of Steam, the pad is seen as a keyboard, and a mouse. Although it has no keys, so you can’t type with it. But you can navigate your Operating System’s GUI using the trackpad, and cursors as a mouse. Once you fire up Steam though, it gets really interesting, really quickly.

The first thing that will happen upon firing up Steam, is a prompt to go into Steam’s Big Picture Mode. Once you do it will want to link the controller to your account. You can skip the process, but doing so won’t let you get all of the functionality. Once it is linked to your account it will give you the ability to customize boot settings, and save key binds to it. The controller includes USB dongles so that you can use it wirelessly, or as a wired controller. It includes 2 AA Duracell alkaline batteries. But you can use also use rechargeable AA batteries instead.

Once you’ve done all of that, Steam will prompt you to download the latest firmware updates. Once that is finished, it takes a brief moment to install, and you’re almost set. You can then calibrate the gamepad. A handy screen comes up with a blueprint. Once you press all of the buttons, and test the trackpads you’re set.

Every game in the Steam store works with the controller on some level. The controller has preset profiles in it that will fit the bill in many cases. There’s a set up to mimic a console gamepad, keyboard, and mouse, along with a few others. Most of the time, you’ll fire up a game with it, and play without a hitch. For those times where things don’t feel quite comfortable or convenient enough for you, you can press the Steam button to pull up a controller menu. You can tinker with the settings yourself, rebind buttons, and even upload your layout to the Steam community. Likewise you can search for a layout for the game you’re playing, and download the one you like best. 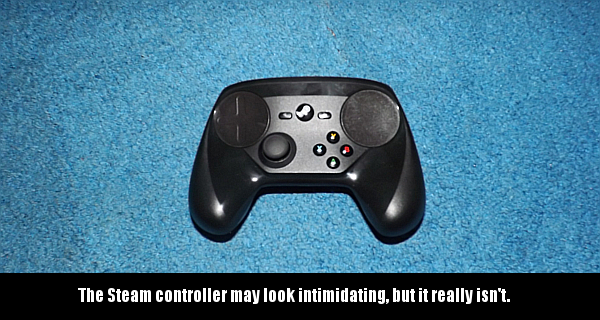 These profiles can also be stored on the controller. So if you take the pad to a friend or relative’s for couch gaming, you won’t have to reconfigure your controller settings. You can also toggle an onscreen controller HUD, showing you where you’re pressing as you play. You may find this handy as you’re experimenting, trying to get things the way you want them.

When playing games that require you to type, or if you’re just surfing with the Steam browser, a handy onscreen keyboard comes up. Unlike the old days of slowly moving a cursor with a D pad or thumb stick letter by letter, you can quickly use your thumbs. The trackpads simulate the feel of texting on a smartphone. It won’t be quite as nice as an actual keyboard. But if you are using your TV as a monitor, with your computer in the entertainment center, it is quite convenient.

Which is really what the controller sets out to do. Make PC gaming, and other tasks viable from your couch. It’s very successful in that regard. The interface feels quick, and comfortable. Navigating Steam with it is intuitive most of the time. With Valve adding more functionality to Big Picture Mode, even playing your albums, or browsing sites online becomes fairly easy from the couch.

I put mine through the paces, and found I was pleasantly surprised with it. Giana Sisters Twisted Dreams was very easy to play with it, though using the left trackpad as a D pad took a little getting used to. The face X,Y,A,B buttons, are laid out exactly the same way as on the Xbox 360, and Xbox One controllers, so it wasn’t long before I was jumping, and twirling to victory.

Broforce also played very well with the pad. I had no issues running, dashing, jumping, and shooting. I was able to do everything about as easily as I could using a 360 controller. In some rounds it was easier, as the 360 pad is notorious for registering angled commands when you’re certain you’ve pressed directly horizontal, or vertical commands.

Speaking of which, I also used the controller with Ultra Street Fighter IV. This also worked favorably. Once I downloaded a 360 pad profile to the controller anyway. The only other issue I had with the game is that while the left track worked wonderfully as a D pad for vertical, and horizontal movement, it wasn’t ideal for the quarter circle, or charging moves. I found myself using the thumb stick instead. Beyond that, I was able to control the game nicely.

FPS are another genre the pad works with very well. I fired up Rainbow Six Siege, and had no issues with it. The right trackpad is much closer to the responsiveness of a mouse than a thumb stick ever could be. It felt about as responsive as Nintendo’s Wii Remote Motion Plus. Having that precision on a traditionally shaped controller could be a Godsend to anyone who prefers playing shooters with a game pad. It still isn’t as precise as a good mouse, but for the comfort of gaming from your couch it is a viable alternative.

Strategy games also benefit, as the right trackpad, again makes mouse movement palatable for fans of game pads. When it comes to any current games, this controller is actually a really good solution. But that’s not all. You can also get many old games, and games you don’t have in your library to work with it. Adding shortcuts in Steam using the Add non-Steam game to my library option means you’ll be able to use the controller with those as well. This is nice because you can fire up your Origin or Uplay account through the Steam client to play your EA, and Ubisoft games. Or your retail disc games.

That being said, in some of these cases you might have to go through many hoops to get things working properly. Either through painstakingly making your key bind list, or having to do file edits or tweaks. In these instances you may just prefer to use a cordless keyboard or mouse since it is a lot less you’ll have to deal with.

But overall I’d say the Steam controller does succeed in making HTPC’s a viable option. It’s cool to be able to fire up your computer into Big Picture Mode, and control almost everything with the controller. Some people will notice that almost anything on the Xbox One or PlayStation 4 is also on the Steam store. Then they may realize that these titles can be played on their big screen HDTV as well. This may make some of them pause, and wonder why they don’t use a computer in their living rooms instead.

But it still doesn’t have the mass market appeal needed to ignite that grand exodus. The simplicity of a game system isn’t quite there. Though this controller, in conjunction with Big Picture does display the massive gains made on the way to satisfying that goal. If you’re serious about building or buying a Home Theatre PC for living room gaming, the Steam controller is an excellent choice. Just know there will still be a few situations where you may still need a traditional keyboard, and mouse.

If you’re PC gaming at a desk, and need a controller for genres where a game pad is preferable, then there are a couple of contenders. The Steam controller again, is an excellent choice. When compared to the bulk of PC gamepads, there’s really no comparison. But Microsoft’s Xbox One pad is going to be a little bit more convenient. Any multiplatform game is going to recognize it in Windows 7, 8.1, or 10 since the OS has drivers for it. But it isn’t an open, and shut case since you’ll need something like Xpadder to map buttons for old PC games, and titles with no modern controller support anyway. Moreover, the Steam controller’s trackpads are again, much more responsive than the thumb sticks on the console controllers.

As far as the overall feel, and build of the device, it stacks up positively against the competition. It’s around the same size as Microsoft’s controller, with the lighter feel of Nintendo’s Wii U Pro controller. It’s easy to get to the buttons on the face, and top. There are also two buttons under the battery cover. One on each side. The battery cover is designed to be pressed to click either of these. Being able to use it wired or wirelessly is also a nice touch.

Ultimately, the controller is geared more toward those interested in gaming on an HTPC. But it’s still a very nice option for gaming at the desk. While it isn’t quite as plug, and play as an Xbox One pad, it still has some big advantages. Being able to save custom key settings is a great feature. The trackpads are much more accurate than a thumb stick, making RTS, FPS, and other genres easier to play. Most other genres play just as easily with the right settings. It’s not going to be perfect for everyone, but that doesn’t make the controller any less versatile. Valve’s controller is a highly recommended peripheral.